…trailers. Zing! You fell for my click bait. No wait! Don’t leave! I’ll explain. (And of course I’m going to see the movie).

I first saw Star Wars in the theater in 1977. I was four. Darth Vader scared the shit out of me. My brothers and I collected the toys and we dressed up as the characters for Halloween. I grew up enjoying the next two films (in the theater) – all the action, the spaceships, lightsabers, all of it. Being a kid, a lot of the nuance was lost on me until I saw the films several times.

When Phantom Menace was hyped in 1999, my expectations went through the roof, and I soaked up every trailer, teaser, and article I could find. Darth Maul kicked ass! Dual bladed lightsaber! Look at that CGI! We finally see Darth Vader’s origin! Bit by bit I pieced together everything I could about the story, and couldn’t wait for what the movie would finally reveal.

And of course, the film didn’t live up to the expectations, for all the reasons the internet has beaten to death in the last 15 years. The trailers showed much of the story, and what new bits were revealed at the theater were little more than gratuitous CGI, squandered dialog, and lost opportunities. Anakin’s just a boy? (I thought Obi Wan said he was a great star pilot when they first met?) Anakin built C3PO? What?!? And while the first run through the movie was entertaining (e.g Darth Maul kicked ass), it didn’t hold up nearly as well as the original three movies (e.g. with little dialog, Darth Maul was not the most compelling villain). Subsequent views brought more groans than cheers. The sheen faded quickly, and the next two movies only furthered this disappointment,  because my expectations were far too high, and the reality was…not.

I’ve seen one trailer for The Force Awakens, and that’s enough for me. JJ Abrams is directing it, and given his past work, I know it’ll be a hell of a ride, and I shouldn’t worry too much about consistency.

I’d prefer to go in knowing next to nothing about the story or the new characters, and I know I’ll be entertained. What I hope is that this movie resets the tone for the next trilogy – a story that will convey the same depth, transformation, and redemption as the original three movies.

I’m boycotting the trailers (probably “avoiding” is more accurate) because I don’t need to see them, in fact I need to not see them. Not now. Maybe after I see the movie, but not now. I’m hooked. I’ll be there. And hopefully, I’ll be delighted. 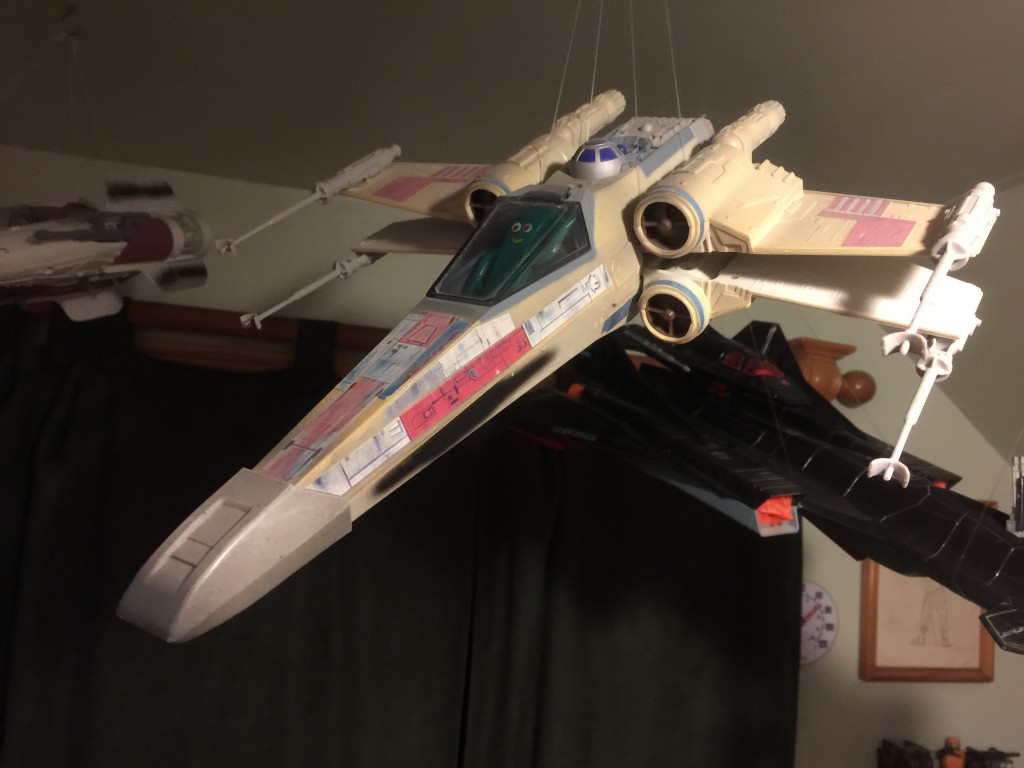 I literally have to dust off this X-wing. Yes, that is Gumby piloting. And yes, those are an A-wing and a Cobra Night Raven in the background.

This entry was posted in Imageek. Bookmark the permalink.