I had a great time at my first Arisia this weekend. I found the diversity of panels and topics intriguing and jumped across several tracks throughout the weekend. Organization was well planned and thoroughly staffed. Every staffer I asked either knew the answer or knew where to point me. Their Code of Conduct was clearly posted both on their website and on the registration mezzanine, and my friends doing Security detail clued me in to some of their training – it was obvious that attendee safety and inclusion were priorities. Saturday night I met up with some old friends, and just generally enjoyed the atmosphere all weekend. It was both laid back and vibrant at the same time. For someone testing the waters of sci-fi cons, Arisia is a great first convention. With so many tracks, one could sample a wide array of interests, or saturate one for the whole weekend.

Before I went, I sat down and thought about what I wanted to get out of the convention. Of course, I made a mind map: 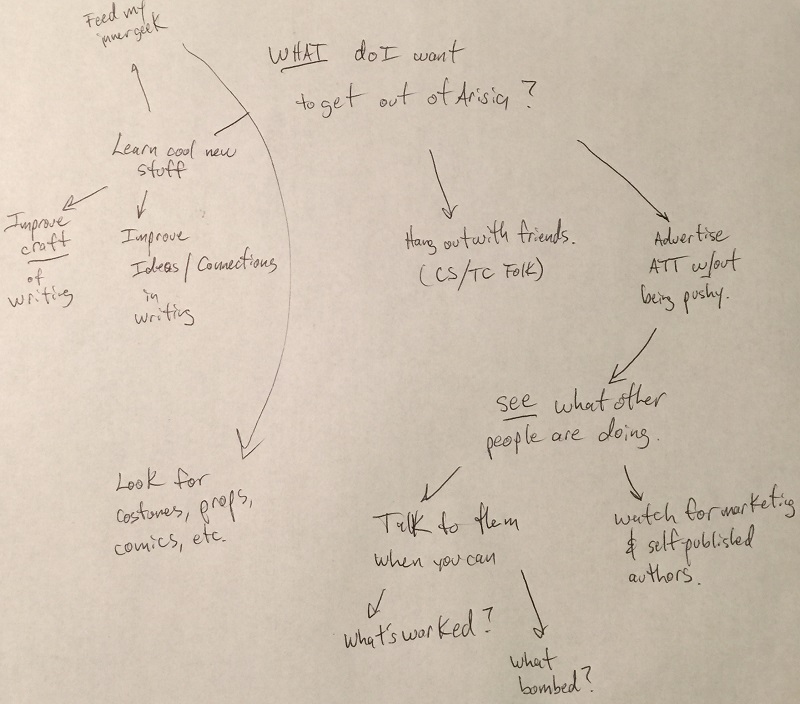 While I didn’t bring the map with me, it helped clarify what I wanted to achieve this weekend.

“Improve craft of writing” – I sat in on N.K. Jemisin’s Saturday reading, where she read a short story/ epilogue to the Inheritance series. Full disclosure—I hadn’t read any of her work prior to the conference, so I was unfamiliar with the setting and characters. Regardless, I found her storytelling thoughtful and rich. Her sentence structure had a rhythmic, repetitive feel, like an elder was sharing the story across a warm campfire. It worked. I’m not sure I could (or should) emulate the style for the Togahan series, but I enjoyed it. Whether or not that improves my craft remains to be seen, but I’ll call it: Goal: ACHIEVED

“Learn cool new stuff” – The “3D Printing – Where does it go from here?” panel was interesting and very speculative. The panel reiterated a lot of information I already knew, but brought up some new ideas as well, and one panelist showed off a full-size Dalek that he built, in part, from 3D printed components. Since my background is in mechanical engineering, I was intrigued by the prospect that 3D printing allows creation of part geometry that is otherwise impossible through “normal” means (e.g. CNC milling). One panelist summed up nicely that 3D printing is fundamentally an extruder married to a robot, and the hard part is taking your 3D model and porting it through personalized off-the-shelf software into a language that the 3D printer understands. Since there’s still a lot of tinkering involved, 3D printing remains in the hobbyist phase, much like home computing in the 1980s. We’re probably a decade away from having them as common as a coffee maker. They also discussed several different materials, and one panelist mentioned how dust from the moon might make an excellent raw material. The discussion then followed a tangent of using 3D printing technology for getting to Mars, because we could just ship the printers there, load them up with local materials, and then print any pieces we need. Another panelist mentioned how crew aboard the International Space Station have already printed a tool they needed for a repair. More down-to-earth, some printers have already been used to grow organic parts, like ears, which aided cosmetic reconstruction. Very cool stuff indeed. I would call that goal: ACHIEVED

“Hang out with friends” and “Feed my inner geek” – Yep. Several local friends attend Arisia every year, and I got to chat with them for a while and attend their party on Saturday night. They’re all cosplayers and larpers too, so I got to appreciate their renditions of Malcolm Reynolds, a Mandalorian mercenary, Judge Dredd, and many others. And, the entire weekend entertained me with a host of geeky topics I enjoy. Goal: ACHIEVED

“Advertise ATT without being pushy” – This is always the tricky part. I want to spread the word about my stuff, and more importantly, entice readers without being obnoxious—the same as every other writer/artist/actor/creator there. While I did cosplay as a couple characters from my books (Surtann and Dante), I soon realized that playing a subtly dressed character from a book few have read meant that I just looked like a random dude wearing a lot of guns. I’ll have to rethink that angle. I also put fistfulls of business cards and pens on the designated tables. I noticed that while the cards were barely touched, the pens went quickly. So I think I’ll have more of those made. Whether free pens converts to more book sales is another matter, but at least there is a higher probability that folks will hit my website and/or google the word “togahan”. Goal: sort-of achieved

“See what other [creators] are doing” – Several self-published authors  sat on panels, and many dispersed printed materials at the tables and Filthy Pierre’s flyer racks. In the future I might do a flyer, bookmark, or some kind of give-away. When #3 is in the final publishing stretch, I’ll have to see whether I can get assigned to some relevant panels. Goal: sort-of achieved

In addition to all of the above, I enjoyed so many panels, including avoiding culture fail , religion in sci-fi, detecting BS , and positive representations of women’s sexuality, all topics which may inform my writing in the future.

It was a great weekend with a lot of brain food to digest. We’ll see where it goes from there.

This entry was posted in Conventions, Marketing. Bookmark the permalink.