Convention! and…One Picture of the Process

First! I’ll be attending Arisia in Boston this weekend (1/16-1/18), and may be cosplaying one or more characters from A Togahan’s Tale. If you’re there and want to link up, contact me and we’ll figure out something convenient.

Second! Here’s a very geeky way I like to think about my writing process. Get yer nerd on and enjoy:

I boil my writing process down to three fundamental mindsets: Brainstorming, Execution, and Polish. All three are critical, but I won’t necessarily engage them one at a time. I’d summarize it with a graphic like this (because I like pictures): 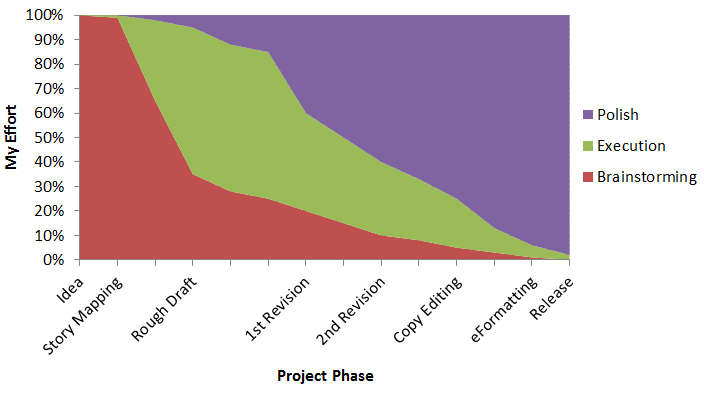 Brainstorming is when all of the ideas come flying at me, and I need to just get them down so that I can organize them.

In either case, the purpose is to capture the idea without a lot of detail, and maybe see where a scene/character/technology fits into the story. Story mapping is also where I’ll identify what’s missing, and what other plot points I need to fill in.

Execution is the actual writing. This is where I refer to my story map and then start narrating with the keyboard.

Execution produces most of the story’s raw material, and takes longer than Brainstorming, but not as long as Polish.

Polish is where I clean it up for the reader.

Polish is the longest phase, just because there are so many sweeps and so many people involved. During Polish I might brainstorm a few solutions, and execute a new scene or two, but as much as I want to improve the manuscript, I also resist the urge to tinker with it too much. At this point, the story is what it is. Polish also includes adding the front and back matter (cover art, maps, acknowledgements, copyright page, etc.), and then formatting the final manuscript for e-release (converting from Word to ePub and.mobi formats).

One thing I need to be careful of is brainstorming too much during the Polish phase. The risk here is that while I might introduce some new interesting bit, I might also introduce a contradiction, and possibly a passage that my copy editor hasn’t reviewed. It can and should be done when necessary, but always with caution.

This is how I do it. Every author has their process, and after nearly twenty years of writing, this is what works for me. If you do something completely different and it works, by all means keep doing it. Many authors prefer to dive right into the Execution, but they’ll also find that their Polish phase is longer as a result. In the end, I don’t think either method is faster or more efficient; it all depends on what gets the job done.

What does your process look like? Let me know in the comments.

This entry was posted in Uncategorized. Bookmark the permalink.