This week I’ll be talking about a major scene from A Togahan Returns, so if you haven’t read that yet, and don’t want stuff spoiled….well, I’ll see you next week. Otherwise, follow me past the page break…

One of my favorite scenes in ATR was when Dante leaped off the bridge to save Sharathana. That rough image -catching someone in midfall- had been in my head for months before I wove it with the rest of the story. While approaching that scene in the rough draft, however, I hesitated. In my original concept, Dante jumped from the smaller peak to save her. But then a thought struck me, in fact woke me right up in the middle of the night in a state of amplified emergency. I keep pen and paper beside my bed to capture these thoughts, and while most mornings they look like a drunken bar receipt signature, in this case, I had written the question, “Can Dante reach her?”

I chewed on that idea for a bit, but that just generated more questions: “Well, how fast is she falling? How tall are the peaks and bridges? How far apart are they?” I needed to answer these before I could answer the big question. These are things that don’t show up in the final manuscript because they’re not necessarily relevant to the story, and shoe-horning them in would have just slowed it down. But they mattered to me, and they mattered to that core question: If Sharathana fell from the higher peak, could Dante travel far enough horizontally, jumping from the lower peak?

Falling back on my engineering education, I drew a free body diagram*: 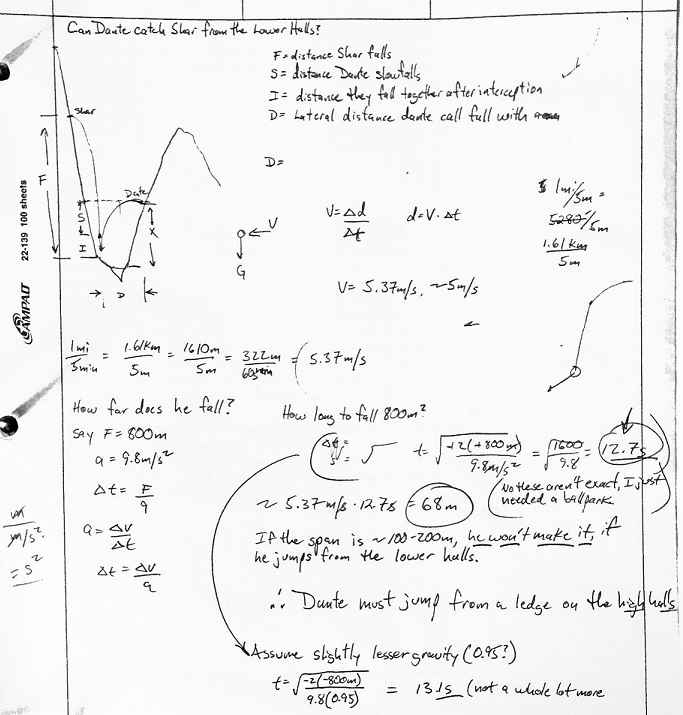 Now, I’m sure I didn’t get the equations 100% correct and some of you can probably find the flaws, but it was enough to give me a ballpark answer: No, if Sharathana fell from the high peak and Dante leaped from the lower peak, he would fall short**.

Maybe most readers wouldn’t have picked up on this, but it would have bothered me regardless. So I took a look at the story and realized that if Dante were able to progress to the higher peak somehow, then he could catch her. And yes, there are probably a dozen other ways I could have no-prized myself out of this inconstancy, but I was shooting for one that felt right with the world and fit right with the story. In the end, it was a gut choice.

I don’t do that type of analysis for every scene, and there are arguably other places where it might have helped, but in this case I was inspired to use it and was satisfied with the result. And hopefully, so were you.

* The numbers here are rough approximations; please don’t interpret them as canon.

**This assumes that Neo’s gravitational constant is similar to Earn’s (which is conveniently equal to Earth’s).  While I could have assumed a different one to provide for the scene I wanted, it would have contradicted the physics…oh, EVERYWHERE ELSE.

This entry was posted in Behind the scenes. Bookmark the permalink.